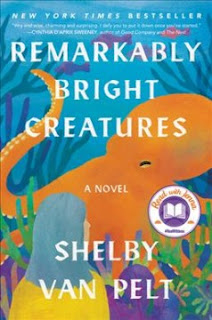 "Remarkably Bright Creatures" by Shelby Van Pelt is a tender and heartfelt novel about the unexpected turns life can take and the unlikely friendships that can be formed along the way. After the disappearance of her son and the death of her husband, Tova Sullivan copes by staying busy keeping the local aquarium spic and span. It's there she forms a bond with a giant pacific octopus named Marcellus who turns out to be much smarter than anyone realized. When an injury sidelines Tova and she decides it's time to hang up her mop for good, it's up to Marcellus to get Tova to understand his clues about her son's disappearance before it's too late.

This book is for adults.