Have you checked out our March Book of the Month, The Island of Sea Women by Lisa See?

Mi-ja and Young-sook, two girls living on the Korean island of Jeju, are best friends that come from very different backgrounds. When they are old enough, they begin working in the sea with their village's all-female diving collective, led by Young-sook's mother. As the girls take up their positions as baby divers, they know they are beginning a life of excitement and responsibility but also danger.

Despite their love for each other, Mi-ja and Young-sook's differences are impossible to ignore. The Island of Sea Women is an epoch set over many decades, beginning during a period of Japanese colonialism in the 1930's and 1940's, followed by World War II, the Korean War and its aftermath, through the era of cell phones and wet suits for the women divers. Throughout this time, the residents of Jeju find themselves caught between warring empires. Mi-ja is the daughter of a Japanese collaborator, and she will forever be marked by this association. Young-sook was born into a long line of haenyeo and will inherit her mother's position leading the divers in their village. Little do the two friends know that after surviving hundreds of dives and developing the closest of bonds, forces outside their control will push their friendship to the breaking point.

This beautiful, thoughtful novel illuminates a world turned upside down, one where the women are in charge, engaging in dangerous physical work, and the men take care of the children. A classic Lisa See story--one of women's friendships and the larger forces that shape them--The Island of Sea Women introduces readers to the fierce and unforgettable female divers of Jeju Island and the dramatic history that shaped their lives.

“Superbly written, this fast-paced read not only encourages readers to reflect on the notion of friendship and family, it also educates on the complex history of the region.” – Library Journal

“ Exposing the depths of human cruelty and resilience, See’s lush tale is a wonderful ode to a truly singular group of women.” – Publisher’s Weekly

“A stupendous multigenerational family saga, See’s latest also provides an enthralling cultural anthropology highlighting the soon-to-be-lost, matriarchal haenyeo phenomenon and an engrossing history of violently tumultuous twentieth-century Korea. A mesmerizing achievement. See’s accomplishment, acclaim, and readership continue to rise with each book, and interest in this stellar novel will be well stoked.” – Booklist 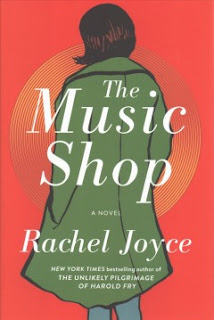 The Books on Tap book club’s March pick was “The Music Shop” by Rachel Joyce. All of our members enjoyed this novel about music, love, loss, and second chances.

Set in 1988 in Great Britain, “The Music Shop” is the story of a man named Frank, who runs a small music shop that sells only vinyl, and who has an uncanny ability to connect his customers to the exact song they need but didn’t know they wanted. One day, a beautiful young woman, Ilse, arrives at Frank’s store, and asks him to teach her about music. Even as he is drawn to her, Frank is terrified of real intimacy; Ilse is hiding a mysterious agenda, and Frank has unhealed wounds from his past. How can a man so in tune with other people's needs be so incapable of connecting with the one person who might save him?

This book is ultimately about the power of music: to heal, to comfort, to bring joy. The reading experience is especially enhanced if you can simultaneously listen to the songs Frank recommends, and discover them along with the characters. The publisher has created a playlist on Spotify (the free music steaming service); just search for “The Music Shop” and choose the playlist created by “penguinbooks”.

If you’re interested in joining a casual book club for adults that discusses new and popular fiction, please join us at our next Books on Tap meeting on April 8, 2019, at Bar Louie Partridge Creek. We’ll be discussing “Nine Perfect Strangers” by Liane Moriarty.

Posted by CMPL Staff at 2:24 PM No comments:

Meghan Recommends "The Life Changing Manga of Tidying Up" 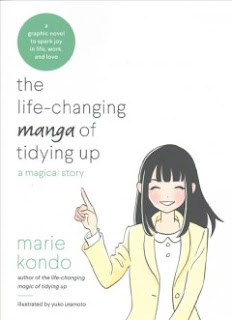 “The Life Changing Magic of Tidying Up” by Marie Kondo was published in Japan way back in 2011, and was published in the U.S. in 2014. While it certainly moment back then, the recently released Netflix series “Tidying Up with Marie Kondo” has brought KonMari tidying back into pop culture.

Like everyone, I had heard “spark joy” but I figured there had to be more. Enter “The Life Changing MANGA of Tidying Up” – a 187-page illustrated story about Chiaki, and how her life is transformed through tidying! Chiaki is in pretty bad shape when we meet her, with an apartment full of stuff and garbage piled up on her balcony – a couple weeks’ worth. It’s so stinky that her cute neighbor comes over to ask her to take care of it. That’s the wake-up call Chiaki needs to take care of her messy apartment. She calls KonMari! Over the ensuing chapters, Chiaki tackles the daunting task of tidying her apartment, and by extension, her life.

At this point I feel like I should reiterate that this is a comic-book style story, and Chiaki is a made up character. Nevertheless, as Chiaki tackles her lessons each week, readers learn about different aspects of the KonMari method, and yes, there is more than just “Spark joy.” The book can easily be read in an afternoon, but it gave me a much better sense of the complete underlying philosophy of Kondo’s methods. I learned about tidying by category (not room) and that you should “wake up” your things when you pull them out of closets where they’ve been stored for years.

So if you want to know a little more about tidying, but you don’t want to commit to 213 pages of nonfiction, this is a good start!

As an aside, “The Life Changing Manga of Tidying Up” was one of the Graphic Adaptations up for consideration in our CMPL Madness Graphic Novel Tournament! It didn't make it out of Round 1, but you can vote for your favorites in Round 2 now!

Posted by CMPL Staff at 8:51 PM No comments:

While I may not be the first to recommend this series (be it the books and/or television series), I have finally managed to start it and can now safely recommend it.  I have been wanting to read this series for a while now, but time and motivation slipped.  But now that I have, I can say that I really enjoy the series.  As someone who enjoys Fantasy series like the Chronicles of Narnia and the Lord of the Rings (and all of Tolkien's Middle Earth related works for that matter), this was a series that I knew could peak my interests.

As a fantasy series, I really enjoyed it.  I enjoyed the detail that went into each character and their story, but still manages to tie back to them in one way or another.  Each chapter shuffled between a handful of characters which include Jon Snow, Arya Stark, Tyrion Lannister, and even Daenerys Targaryen and will focus on them and their surroundings.  It also has characters that you'd probably recognize if you've seen the show but haven't read the books (i.e. the Stark Family, Daenerys' brother, and Joffrey).

This is a book series for adults given some of the language used, violence, and some of the themes/topics brought up.  We have all five main series books and two spin off/prequel books.  If you have seen the series but haven't read the books, or are looking for a good read, I would recommend it.  And while I personally still have to read through the other books, I think it's really good so far.

Posted by CMPL Staff at 5:21 PM No comments: