Kathy recommends the Book of the Month "Artemis" by Andrew Weir

CMPL BOOK OF THE MONTH FOR JANUARY 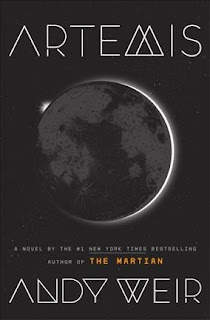 Jazz Bashara, the heroine of this superior near-future thriller, grew up in Artemis, the moon's only city, where she dreams of becoming rich. For now, she works as a porter, supplementing her legal income by smuggling contraband. She hopes that her situation can improve drastically after she's offered an impossible-to-refuse payday by wealthy entrepreneur Trond Landvik, who has used her in the past to get cigars from Earth. Trond asks Jazz to come up with a way to sabotage a competitor so that he can take over the moon's aluminum industry. She develops an elaborate and clever plan that showcases her resourcefulness and intelligence, even as she continues to have misgivings about her client's true agenda, suspicions borne out by subsequent complications. The sophisticated world building incorporates politics and economics, as well as scientifically plausible ways for a small city to function on the lunar surface.

It's one of the best science fiction novels of the year—but to make it clear, Artemis is not The Martian (2011) redux. Tone, characters, structure are all very different. It's more traditional sf and lacks the cheery novelty that characterized Weir's famous first novel. The setting is just as detailed and scientifically realistic, but science isn't the focus this time. Weir's sarcastic humor is on full display.

This book is recommended for adults.  Not only for science fiction fans, but those who enjoy crime capers in a unique setting as well.

Posted by CMPL Staff at 9:49 AM No comments:

Do you need to keep the kids, tweens and teens occupied over the holiday break? Check out one of our books on making or tinkering:

Posted by CMPL Staff at 9:59 AM No comments:

WIND RIVER is a chilling thriller that follows a rookie FBI agent (Elizabeth Olsen) who teams up with a local game tracker with deep community ties and a haunted past (Jeremy Renner) to investigate the murder of a local girl on a remote Native American Reservation in the hopes of solving her mysterious death. Written and directed by Taylor Sheridan, WIND RIVER also stars Gil Birmingham, Jon Bernthal, Julia Jones, Kelsey Asbille, and James Jordan.

For those who enjoy mysteries, Wind River is a character-driven drama with excellent acting, a strong sense of place in the frigid snow of Wyoming, and the thought-provoking exploration of themes ranging from grief and loss to Native American disenfranchisement.  A New York Times Critics Pick and 2017 Cannes Film Festival winner for Best Director.

Rated R for strong violence, a rape, disturbing images, and language.  Suitable for adults only.