Michelle recommends "I Found You" 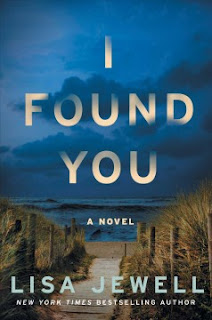 Looking for the next suspenseful, psychological fiction to add to your reading list? Check out I Found You by Lisa Jewell. Sometimes reading a multiple character storyline can get tedious, but Lisa Jewell develops the characters and their stories in an intriguing and balanced way.

We start with a single mom, Alice, that comes across a man near her home who has lost his memory. His memory of everything; from his name, to his likes and dislikes, to why he ended up on the beach in front of Alice’s home. So she decides to welcome him into her chaotic life and home, then tries to help him recover and rediscover his life.
There is also a young newlywed, Lily, in a suburb of London that has reported her husband missing. Her husband has disappeared somewhere between leaving work and getting home, but she does not feel the police are not working quickly enough to help her find him. She is alone, new to the country and anxious to find her devoted husband.

And then, we get to go back to 1993 where a family of four is vacationing in Alice’s town when they meet an eager young man, that is not quite trusted by everyone in the family.

It is clear that something terrible happened in 1993, but it’s interesting to try to figure out how the memory-less man and Lily’s husband are connected, both to each other and the story in 1993. If you enjoyed Paula Hawkins Girl on the Train, give this one a try.

Lorna is determined to be married within the grand, ivy-covered walls of Pencraw Hall, known as Black Rabbit Hall among the locals. But as she’s drawn deeper into the overgrown grounds, half-buried memories of her mother begin to surface and Lorna soon finds herself ensnared within the manor’s labyrinthine history, overcome with an insatiable need for answers about her own past and that of the once-happy family whose memory still haunts the estate.

An atmospheric and intriguing tale, this would be a good read for fans of Susanna Kearsley, Daphne du Maurier, or Kate Morton.

Recommended for older teens and adults.
Posted by CMPL Staff at 8:17 PM No comments:

Annie's Ghosts takes place in Detroit as the author attempts to track down the long-lost aunt he never knew he had. I found this an interesting nonfiction story, not only for the familiarity of the areas discussed in the book, but also the topic of physically or mentally challenged people and how they were handled in early 20th century. In addition, the book also dealt with information about World War II and the exodus of Jewish citizens from Eastern Europe.

If you liked this book and want to discuss it, it will be the subject of the Wine and Proses book discussion on August 1 at Filipo Marc Winery. Register to attend to discuss the book with us!
Posted by CMPL Staff at 3:42 PM No comments:

Okay, I'll be the first to admit it- we're all growing tired of the 'chosen teenager takes down an oppressive, dysfunctional social hierarchy in a dystopian future', so I began reading 'Red Rising' with more than a few grains of salt. However, this trilogy is less like 'The Hunger Games'  or 'Divergent', and reads more like 'Ender's Game' or a Sci-Fi version of Game of Thrones (if it only focused on Jon Snow). There's a reason this book is in the Science Fiction part of our library and not the Young Adult section, and that's because this series is very, very heavy. I'm glad I gave it a chance, because through the first half of 'Red Rising' I scoffed at how predictable it was. The main character, Darrow, is a red, the lowest in a color-based society, where he works as a miner on Mars. Through a series of events, he's turned into a gold, the rulers of the color caste system, where an underground organization uses him for their own purposes (to have all colors treated as equals) using Darrow as their golden proxy. This is where I rolled my eyes and shook my head, dreading another Hunger Games. Luckily, the rest of 'Red Rising' played out much differently than anticipated, and by the time 'Golden Son' rolls around, Darrow isn't even a teenager anymore. By the time I finished 'Golden Son​' I could hardly wait to read 'Morningstar', and I finished it in 2 days. All in all, if you like the Ender series, and you can get past the first half of 'Red Rising', chances are you will love this trilogy.
Posted by CMPL Staff at 6:09 PM No comments: