Celia recommends "The Last of Sheila" 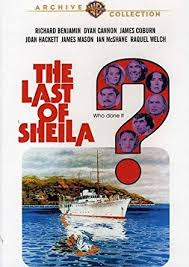 A year after Sheila is killed in a hit-and-run, her multi-millionaire husband invites a group of friends to spend a week on his yacht playing a scavenger hunt-style mystery game. The game turns out to be all too real and all too deadly.

A twisted, psychological thriller/who-done-it that, for the most part, holds up over time. Originally released in 1973, The Last of Sheila is well acted, well written, and uses it’s sets to full advantage. For fans of today’s horror/thriller movies, this one will probably seem too slow paced and dialogue heavy. For those who like to solve puzzles, though, the film will keep you on your toes right to the end. It reminded me of movies by Alfred Hitchcock, which isn’t surprising since Anthony Perkins of Psycho fame co-wrote it. It also reminded me of a creepier, less campy version of the movie Clue. Highly entertaining and enjoyable to watch.

Recommended for Adult.
Posted by CMPL Staff at 2:30 PM No comments:

This is a brand new board book that just came through and we immediately thought it would be a story time hit!  If you have a young child that loves either singing or animals, you will have a great time reading (or singing!) this book aloud as the animals take part in the Hokey Pokey.  The staff here have loved it so much that babies and toddlers who attend story time will soon see it in the regular rotation.
Posted by CMPL Staff at 5:38 PM No comments:

Connie recommends "Where the Crawdads Sing" by Delia Owens

Great story with a surprise twist.  I especially enjoyed listening to the audio version of this book as the narrator, Cassandra Campbell, does an excellent job representing the characters as Delia Owens portrays them.


For years, rumors of the “Marsh Girl” have haunted Barkley Cove, a quiet town on the North Carolina coast. So in late 1969, when handsome Chase Andrews is found dead, the locals immediately suspect Kya Clark, the so-called Marsh Girl. But Kya is not what they say. Sensitive and intelligent, she has survived for years alone in the marsh that she calls home, finding friends in the gulls and lessons in the sand. Then the time comes when she yearns to be touched and loved. When two young men from town become intrigued by her wild beauty, Kya opens herself to a new life–until the unthinkable happens.

Perfect for fans of Barbara Kingsolver and Karen Russell, Where the Crawdads Sing is at once an exquisite ode to the natural world, a heartbreaking coming-of-age story, and a surprising tale of possible murder. Owens reminds us that we are forever shaped by the children we once were, and that we are all subject to the beautiful and violent secrets that nature keeps.

Posted by CMPL Staff at 3:19 PM No comments:

Celebrate President’s Day by finding out about the people who have held the Office of the President of the United States. From beginning readers to adult books, we have something for everyone! Check out our biography sections for books on your favorite president or treat yourself to some fun facts and anecdotes by checking out one of these titles:

Posted by CMPL Staff at 4:33 PM No comments:

As you may notice by the cover, the image of Jack Frost is similar to his appearance in the DeamWorks animated movie Rise of the Guardians.  Which would make sinjce since he was one of the people who worked this movie (as well as several short films and cartoons), as well as being the one that wrote the children books predeceasing it.  This is the fifth book in a series about the guardians of childhood, the first four centering around Nicholas St. North (Santa Claus), E. Aster Bunnymund (the Easter Bunny), Queen Toothiana (the Tooth Fairy), and Sandman (also known as Sanderson Mansnoozie) in that order.  Along with their friend Kathrine and a few other familiar characters.

This book centers around, as you probably guessed, Jack Frost.  It picks up years after the Guardians battle against Pitch, the king of nightmares, and looks into how Jack Frost became Jack Frost and the life he's been living.  Without giving too much away from the previous four books, he was  a being called Nightlight, who helped the Guardians and was a good friend of Kathrine.  This book highlights his life, memories as Jack Frost, and the plan to stop Pitch for good.

As I previously stated, this is the fifth and final book, so you will want to read those first.  We have books one through three as well as this book.  However, we do not have a copy of book four, Sandman and the War of Dreams, but can be found on MeL.

This is a book that is directed towards kids, but all ages can enjoy this series about these fairy/folktale figures.
Posted by CMPL Staff at 4:34 PM No comments: