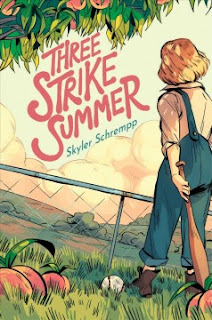 Gloria Mae Willard wants nothing more in life than to play on a baseball team. She could strike out anyone, if she only had the chance to show off her pitching skills – but she has yet to find a baseball team that will let a girl play. When her parents have to sell their house in Oklahoma during the Dust Bowl and move to California where they work as migrant farmers, everything in Gloria’s life seems like it has turned upside down. There is barely enough food to eat, they live in a shanty, they have no freedom to go where they want, and they can’t even eat the peaches that surround them in the orchard. Yet in the midst of the family’s turmoil, Gloria learns there is a secret baseball team – and this time, she is going to find a way to play. I was immediately drawn into this story of a stubborn girl who learns to stand up for herself and for her community. I think anyone who reads this will want Gloria to be on their team!

I would recommend this for middle grade readers – upper elementary and middle school.