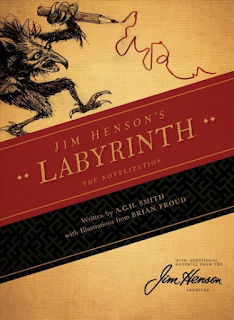 This is the novelization of Jim Henson's Labyrinth movie (staring the likes of  Jennifer Connelly and the late David Bowie). The movie is one of my all time favorite movies, so finding out that there was a novelization of it was definitely something I found interesting. The book follows the movie pretty closely, just without all of the musical numbers. So even if you haven't seen the movie, which I would definitely recommend, you don't need to have any prior knowledge of what the book is based on.

Jim Henson's Labyrinth tells the story of Sarah, a young girl who finds herself pulled into an adventure to save her brother. After making a wish out of frustration, her baby brother Toby is taken by Jareth, the Goblin King. She is given thirteen hours to solve the labyrinth or else Toby will become a goblin himself and stay there forever.

Along the way she meets Hoggle, a grumpy Dwarf like creature, who's initially unsure if he wants to help Sarah or not, but slowly becomes a friend, even questioning and going against Jareth. There's Ludo, a big red haired beast that Sarah saves from some goblins. Then there's Sir Didymus, a fox terrier knight and his noble canine steed Ambrosius.

This is a whimsical tale of growing up, learning from mistakes, and changes. It does have the rare swear here and there. I would recommend it for Teens and Adults