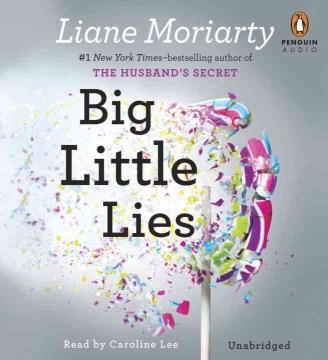 
Liane Moriarty has been on my radar lately. Her latest book (Truly, Madly, Guilty) has been getting great press, and a friend recently recommended her, so I picked up Big Little Lies, which was a library pick several months ago.


Right from the beginning, Big Little Lies grips the reader. We know someone dies, but not who. The circumstances of that death, told from the points of view of various characters, is unraveled over the course of the book. The main plot follows charming busybody Madeline, young single mother Jane, and the effortlessly beautiful Celeste, all parents of kindergartners in a small beachy community. As the women become friends, they become enmeshed in the politics of the playground, and bullying among the kindergartners quickly escalates in the parents’ relationships. Characters sometimes seem straight out of “central casting,” but Moriarty makes you love them anyway.

This book is a fun, fast-paced page-turner with a satisfying ending. Reese Witherspoon optioned the book and stars in the limited series coming to HBO in February of 2017, so read it before it’s on everyone’s list!

Posted by CMPL Staff at 8:39 PM No comments: